In December 2008 I got married when my life was great; I had a brilliant job as a Marketing Communications Manager, I ran website, I had a busy social life – basically I thrived off being under pressure.

Ten days later on my honeymoon I found a lump on my breast, then got diagnosed with an aggressive (grade 3) tumor ( breast cancer). I then spent the 1st year of my marriage going through 18 weeks of chemotherapy and 3 weeks radiotherapy.

When I finished treatment I went back to work but I wasn’t the same person as I previously was, I lasted a year at work and then I took VR – pretty much to search for ‘my purpose in life’ (I’d literally scour the net for ideas; going to change my job, looking at doing charity treks, how I could raise breast cancer awareness, fundraising – pretty much I did anything I could to change my life and give meaning to why the cancer didn’t take me!)

Cancer was a big surprise to me. There’s no history of breast cancer or any cancer in my family whatsoever. I was the first person to go through this journey.

It took 5 months of soul-searching when a friend suggested I set up my own marketing consultancy which I did and has been going great for a year.

I always wanted to write a book, but never knew what kind of book to write. A few months I finally figured it out. I could use my life experience to help family and friends of breast cancer sufferers; explaining in ‘my language’ all of the medical terms, how the breast cancer patient will react in certain situations, the side affects of treatment, how they can help along the way.

I have found my purpose in life, I want to help Mums, Sisters, Best Friend’s, Husbands and caretakers of those dealing with breast cancer. I want to share how important they are to those of us, whom they love, and have been diagnosed with breast cancer, after all I’ve got 1st hand experience at it!

Wow, Katherine! What a story! Thanks for sharing it with us. 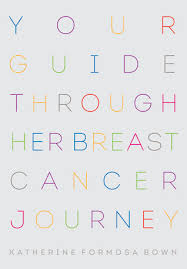 Her book is on Amazon for just $0.99 and the profits from her sales until 12/31/12 will go towards Breast Cancer Care. I think we can all spare to help.

Katherine was born Cardiff, South Wales, UK. She has worked in the marketing field for over 15 years. She was diagnosed at 33 years old with Stage 1, Grade 3 breast cancer in February 2009, after finding a lump in her breast while on honeymoon. She had 18 weeks of FEC chemotherapy, 3 weeks of Radiotherapy and is currently still taking Tamoxifen.Since completing treatment, she has given a lot of her time to supporting and fundraising for cancer research and breast cancer charities. Connect with Katherine on Twitter or Facebook

During this month we’re talking about the dangers of hatred and my dear friend Shelley Hitz is here to talk to us about forgiveness. Very timely, enjoy!!

I practiced as a Physical Therapist for twelve years, and therefore know the general process required to heal from a broken bone. First, the doctor will give you a diagnosis via x-ray, MRI or other test. Then, a cast or splint is applied and you are given orders to rest your body part as the healing takes place. For a broken leg, crutches are often needed for a period of time. Finally, the last step is to exercise your joints and muscles again to regain your strength and be able to walk again on your own.

However, when God began to heal my broken heart, this was new territory for me. There is no textbook answer on what the process is for healing a broken heart. However, one of the first steps God took me through was forgiving those that hurt me.

Years ago, I was at a retreat for Christian women where the speaker shared her story of being sexually abused and the healing God brought to her broken heart. As I listened to her story, a memory from my past began to surface. I could relate to her story in that I was not violently raped and therefore had unknowingly dismissed the incident as simply part of “growing up.” However, when I later shared with my counselor what happened to me in junior high when a boy did sexual things to me that I neither wanted nor knew how to resist, she affirmed that it was indeed sexual abuse.

Feelings surfaced that I did not even know existed…anger, grief, unforgiveness. For the first time, I cried and grieved the innocence that was taken from me that day. As I sobbed, I asked God to help me. And He gently showed me that I needed to forgive the boy that did this to me. Forgiving him did not mean that what he did was right or that I was justifying his actions. It was for me, so that I could be free. I’ve heard it said that unforgiveness and bitterness is like taking poison and expecting it to kill the other person. The only person it hurts is me.

It took a step of faith to forgive as I did not feel like letting go of my anger and unforgiveness. Not only was my innocence taken that day, but there was a door opened to the enemy in the area of my sexuality. And later on in my life, I became captive to sexual sin. As a Christian woman, I found myself struggling with pornography. Although I don’t blame my choices and my sin on the sexual abuse, I know it was part of the process. And so I was angry and did not feel like forgiving.

And yet, God empowered me to surrender my anger to Him and forgive.

It was a process and not an instant fix. But, as I took the step of forgiveness, God led me down the path of healing my broken heart. I am thankful today that I am free from my struggle with pornography. God is now using what the enemy meant for evil for good – to provide hope to many.

Shelley Hitz has been ministering alongside her husband, CJ, since 1998. They currently travel and speak to teens and adults around the country. Shelley’s main passion is to share God’s truth and the freedom in Christ she has found with others. She does this through her books, websites and speaking engagements. Shelley’s openness and vulnerability, as she shares her own story of hope and healing, will inspire and encourage you.

Shelley has been writing and publishing books since 2008 including the book she co-authored with S’ambrosia Curtis, “A Christian Woman’s Guide to Breaking Free From Pornography: It’s Not Just a Guy’s Problem.” During their book launch on 9/26/12 – 9/27/12, you can download a free Kindle copy and also enter to win over $400 worth of resources. Find out more at www.ChristianWomenandPorn.com