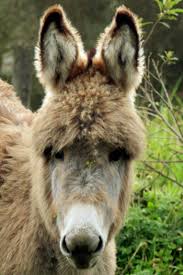 In the last couple of weeks I’ve heard different people, who don’t even know each other, say that someone is so stubborn that they have been compared to a burro. In the animal kingdom we know that when a donkey or burro decides to sit, they would stay there and not move no matter what you do.

So what do we do?

I have been thinking about this for a while. I thought it was interesting to hear the same analogy from people who didn’t know each other. We have many “burros” in our lives. Those are the  people we define as being quite stubborn and will not even think of considering another’s point of view. But we have to try.

I went searching for the answer and this is what I found.

“First make sure your donkey is not sick and is a healthy .Practice leading in a small space before attempting to go out into the open as donkeys are really strong. Make sure you have the verbal commands, walk, whoa, backup, over (porcupine game) in place before stepping out into the open for walks. In the beginning small cut pieces of carrots and a green apple help with learning how to lead I do train with treats in the beginning and surprise them every now and again later.”

When I look at it within people and within faith it is not too different.

Make sure that they are not sick.

How many times do people have issues that make them react the way they do? How many times do our issues make us react the way we do? We have to be sensitive to those situations instead of jumping on the judgment bandwagon. We should be a witness for those people with issues and acknowledge our own issues in order to work on them.

Practice leading in a small space before going out in the open.

This reminds me when Paul said in 1 Corinthians 9:19-21 “Though I am free and belong to no one, I have made myself a slave to

Make sure you have verbal commands

I have to admit that I’m one that sometimes thinks, “They should know better”. I have to be honest with myself and know that there were times when I didn’t. Guess what? They may not know either. Sometimes you have to tell the truth in love. Sometimes people don’t know of the other options in life to resolve things.

In the beginning cut small pieces of carrots and apples

Do you remember how long it took you to actually get it? I know it took me a lot of time and sometimes I still miss what God is trying to tell me. We should not be preaching and giving small portions of knowledge without losing the relationship. At some times we just need to share times and have a relationship with a person before you can even get a word regarding the Word into the conversation. Remember, small pieces of carrot not and apples and you will move the burro, otherwise he won’t move. The same goes for people; you can’t give them what they are not ready to receive. Be conscious and graceful.

Train with treats in the beginning and surprise them every now and again.

Let people in your life know that you care about them. If you are preaching to them all the time instead of building a relationship, YOU are the one missing the point. God places people in our lives to make community and to love, not to change them. If you want to make an impact in someone’s life, you first have to be an example that they want to follow. Then you have to have someone they want to be around. How do you like extremely religious people? There’s your answer.

I promise, I’m not trying to compare humans to burros, but I know I have been a burro and I’m grateful for those who had patience with me. I would not have made it where I am without them

Until next time… Be blessed.