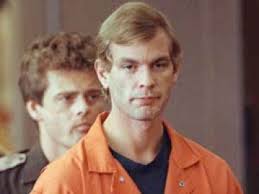 Every time someone thinks of Jeffrey Dahmer the first thought is that of a serial killer. He raped, killed and kept the parts of some of his victims. He buried some of them. It was known that he killed around 17 men and boys.

I was looking into my usual crime stories and amazingly enough I had heard the name but didn’t know the story. To my surprised I read not only about the despicable disgusting things he did, but as I kept reading I found out something that it’s not talked about much.

While in jail, after being apprehended while his last potential victim was able to escape and alert authorities, Dahmer did something amazing… He gave his life to Christ.  Yes, my mouth dropped and I couldn’t believe it, he repented and got saved and accepted Jesus as his Lord and savior.  He even got baptized.

The bible says that in Mark 16:16 “Whoever believes and is baptized will be saved, but whoever does not believe will be condemned” and it also says in Isaiah 1:18 “Though your sins are like scarlet, they shall be as white as snow; though they are red as crimson, they shall be like wool”

Dahmer was attacked twice in jail, once coming out of a church service and late

r on while cleaning floors and that’s when he was killed. I think this is an inspirational story. I believe that in the eyes of God there are no sins bigger than other. A lie and a murder carry both the same weight; maybe not in our eyes, but in God’s eyes.  (1 John 3:4-5 Everyone who sins breaks the law; in fact, sin is lawlessness)

If I follow the Word of God then yes, Jeffrey Dahmer could be in heaven. I can’t be certain as only God knew his heart.  We believe in a God that can forgive it all. Isn’t that great? If you have not raped and murder anyone,  guess what? if you repent, what you did can be forgiven. But there’s more, even if you have… if you repent you can be forgiven too. We all can.

I thought that was a deep concept to process and wanted to share. I would love to hear your thoughts.

4 thoughts on “Could Jeffrey Dahmer be in heaven?”